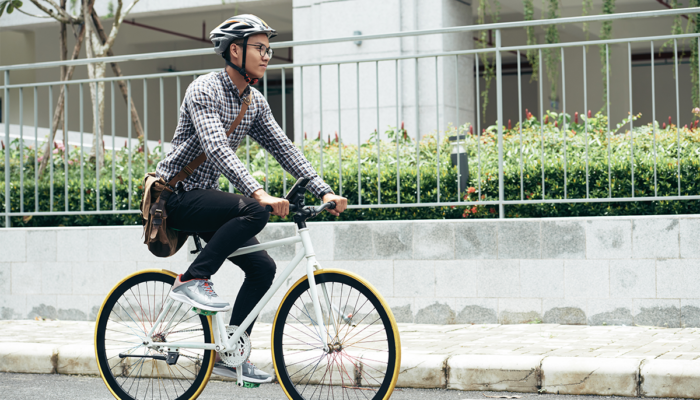 Over the past decade, bicycling has become increasingly popular for recreation, exercise, and to reduce one’s carbon footprint on the environment. As a result, the number of bicycling-related injuries and deaths has also risen, and Arizona is ranked among the top five most dangerous states for cyclists.

It is legal for bicycles to ride in traffic lanes in Arizona; however, many cyclists are not aware that they are equally responsible for sharing the road with motorists and must adhere to the following laws:

A.R.S 28-644. Obedience to and required traffic control devices. Cyclists on the road must adhere to stop signs and traffic signals same as motorist.

A.R.S. 28-704. Minimum speed limits; requirement to turn off roadway. Cyclists on a two-lane road that have five or more vehicles behind them are required to pull off when safe to do so to allow the vehicles to pass.

A.R.S. 28-813. Riding on bicycles. A rider must be seated on a permanent or regular seat that is attached to the bicycle frame. Additionally, each rider must have his or her own seat. For example, two riders are not permitted to be on a bicycle equipped with only one seat.

A.R.S. 28-814. Clinging to vehicle. A rider on a bicycle is not permitted to be towed by or attached to a vehicle on the road.

A.R.S. 28-815. Riding on roadway and bicycle path; bicycle path usage. Cyclists must travel in the right-hand lane or as close as possible to the right-hand curb or edge of the roadway, except when passing another vehicle traveling in the same direction or when making a left turn at an intersection or onto a private road or driveway. Additionally, only two cyclists on a roadway may travel side-by-side unless on paths or roadways exclusively designated for bicycles.

A.R.S. 28-816. Carrying article on bicycle. A cyclist is not permitted to carry a package, bundle or article while operating a bicycle if item(s) prevents the rider from keeping at least one hand on the handlebars.

A.R.S. 28-817. Bicycle equipment. Sirens and whistles are not permitted to be used on a bicycle. Bicycles used at night must be equipped with a head lamp that emits a white light visible from a distance of at least 500 feet ahead and a red reflector on the rear that is visible by a motor vehicle’s head lamps from 50 to 300 feet. A red taillight visible from 500 feet is also acceptable for the rear of a bike. Bicycles must also be equipped with a brake the enables the rider to make the brake wheels skid on dry, level, clean pavement.

A.R.S. 28-904. Driving on sidewalk. Bicycles may not be ridden on sidewalks meant for pedestrians.

In addition to these state-wide laws, some counties and cities have helmet laws. Regardless of whether they are mandated, it is highly advised to always where a helmet when operating a bicycle.

Riders should also follow the Bicyclists’ Code of Conduct and pledge to be courteous to other cyclist, pedestrians, and motorists. The following are safety reminders and proper cycling etiquette: